Hi All
Sorry for bombarding you with constant emails, and I promise this will be my last before Sunday
The weather forecast has changed quite dramatically for the weekend now, and the heat wave we were promised has turned into a more traditional British Summer’s day.
It’s not a big deal, as we’re all used to racing in the wind and rain, but I just wanted to drop everyone a head’s up on a couple of things we’ll potentially move around, and some information that might help.

This is the ever changing BBC forecast  as it stands at 11am today; 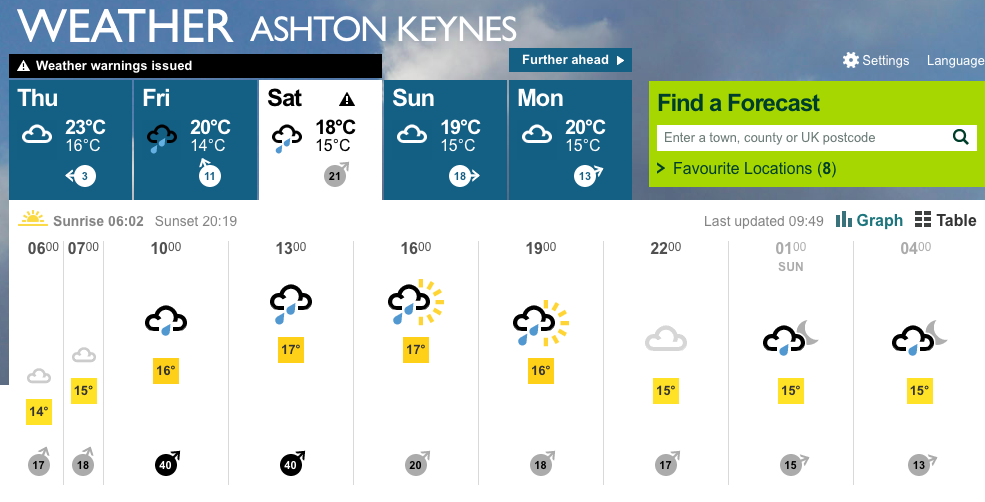 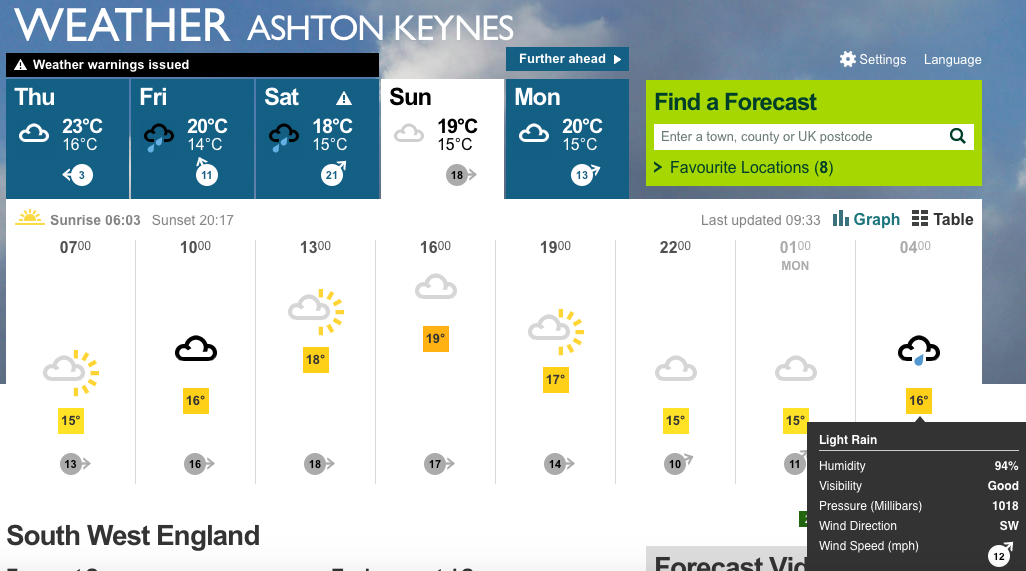 In this email, I’ll cover the following ;

Lake Temperature & Depth
The one good thing about the three week heat wave not being 30deg and actually just being normal 20ish deg summer is that the lake temperature’s are now back to a normal 19-20deg, so we’ll be very much in the ‘Wetsuit Optional’ range for Sunday’s race.
However, the lack of rain has meant the lake is at the lowest I’ve seen it in around 8-9 years, so there are some shallow spots on the course.
I sat with the lake guys yesterday, and we’ve devised a slight tweak to the swim course that will mean there’s a couple of points where you can touch the bottom with your hands, rather than if we used the traditional course, you’d be standing up and walking 4 foot before diving back in (the lake was once a quarry, so has a bar than runs across the middle that was used for cranes etc when excavating)
I’ll put a revised swim map up in registration, but it’ll basically mean that the dog leg section will go further back towards the start, and not a massive change at all. Just be aware that if you’re swimming along and the person in front of you stands up, they’re not actually either David Blane or Jesus and can walk on water, but they’ve hit the sand bar section. 98% of the swim course is still nice and deep though, so this shouldn’t effect racing much and, if anything, will give the weaker swimmers a good chance for a rest.

Run course Condition
As it stands today, the run course is in fantastic condition and 100% road shoes type terrain.
However, if we get the rain we’re forecasted to receive on Friday/Saturday, this could change.
Most of the non tarmac sections of the run are under the cover of trees, so tend to miss a lot of the rain, and largely dispel water quite well. However, if it is very wet for two days solid, this could quickly become off roads shoes type of ground.
The paths tend to take running well, so a consideration might be that if you’re lucky enough to be the quickest people on the course, by the time you’re getting closer to finish, the paths would have had very little footfall cutting them up to make them squelchy, However, if you’re nearer the back end of the field, the paths would’ve had many more feet over them and potentially be quite slippery
We have no problem with any competitors having both road and offroad shoes in transition. and nipping back in on the way past to make a quick change (the run course goes by transition on each lap)
You also might want to bring all options with you and decide on Sunday morning
Either way, I wanted to give you a heads up

Bike prep and spares
We’ve had very little rain down here for a few weeks, so if it rains on the weekend, not only will the bike course be quite slippery from all the residue that’s built up on the tarmac in the last few weeks, but it could also mean that the thorns and other sharp stuff that builds up in the hedges, could get washed up onto the course. We’ll be sweeping the roads, but getting to all of it all of the time during the race is if its still raining’s impossible
We will have 3x moto support guys that will carry basic tools and spare tubes, as well as 3 bike support vehicles. However, they could take some time to get to you if you puncture if there’s a lot of mechanicals on the course, and ultimately, you guys are responsible for carrying your own spares.
With that in mind, it might be worth checking your spare tubes, having a practice at swapping them, or maybe even carrying another spare. We’ll always get to everyone when we can, but it could take some time.
The forecast is showing that we’ll have around 18-20mph winds on Sunday. The course is largely sheltered from the wind, so if you were weighing up whether to use standard wheels, deep section or a disk, I’d suggest you base your decision around this.
Personally, if I was racing, I’d run a pair of deep section rims on that course over a disc every time with that amount of wind. The choice is obviously yours and we’re all adults, but please make your decision sensibly rather than just trying to justify to your husband/wife why you’ve spent £1200 on a disc wheel that has stayed in the car 🙂

Clothing rules and how we apply them
The BTF rules say that you must  finish in the clothes that you start an element of the race in and that you can’t take clothing from people along the way.
However, in the interest of people getting around warm and comfortably, we have no problem with people either picking up clothing or shedding clothing with a marshal on the route. We’d much rather people start with more clothes on that they’ll perhaps need and have to drop a jacket or jersey with a marshal on the way around, than find themselves suddenly under dressed and sitting on the side of the road shivering waiting to be picked up.
Any clothing that is left with a marshal will be collected up and available to collect from the registration tent at the end of the day.

Saturday briefing
We are currently planning on Holding the briefing by the swim exit at 14:30 on Saturday afternoon.
However, if the forecast is correct and we’re to get 40mph winds and rain between 12:00 and 15:00, we may have to move this back to 17:00
We’ll play it by ear and let people know on the day. The briefing is held outside, so if it’s still raining heavily at 17:00, we’ll just have to muscle it and get our jackets on.
We’ll put a sign up in registration on Saturday lunchtime once we have a better idea of what it’s likely to be like

Right, that’s it from me today
The weather forecast for Sunday is actually looking not too bad, so I didn’t send this email out to scare anyone, but I wanted to give everyone a heads up so you can all prepare accordingly

We’re here to help, so if anyone get’s any questions or needs anything from us between now and race day, please just give me a call – 07595 591612 as I’ll have limited access to emails

Cheers and see you all at the weekend